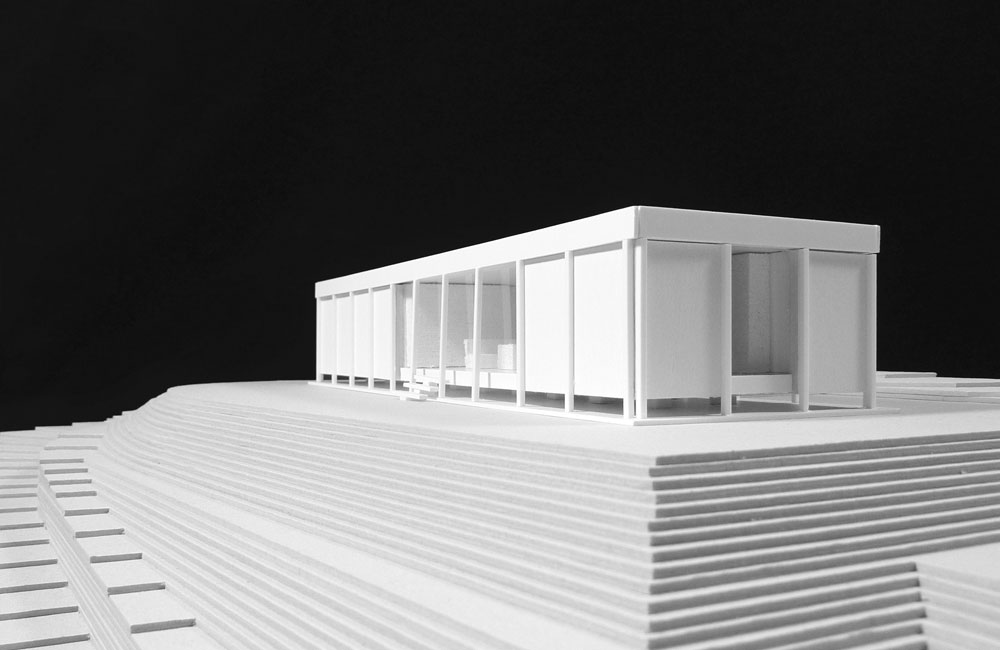 The lot has a total area of ​​933 square meters, is level, the south side slopes down to the street below. The north side is adjacent to a single-family residence. On the south side it opens up the Tresa river valley which connects the basin of Lake Ceresio with that of Lake Verbano. It is served by a local road that marks the property line on the west and south side.

The building is located in the northern part of the lot, close to the limit of withdrawal. It is oriented according to the cardinal points. The main façade are oriented to north and south. Access is via the local road that leads to the covered asphalt area of ​​the car park, at the western border of the lot.

The structure of the building is organized in parallel longitudinal strips. The main module is composed of an orthogonal grid of 5x 5meters to which has been added a second band distanced exactly the proportion of the diagonal of the square (root of two).

The form is repeated serially 7times. In the center of the building a third band has been added at a distance equal to half of the main square. The spaces of the house are organized by this route.

The space of the house is comprise around the living room-kitchen area, volume with a greater height than the rest of the building (5 meters), the facility is lighted from above, from the perimeter of the “drum”, fully glazed. The south front is protected by a portico under which the full height windows open, those in the dining area and in the hall are sliding, once open they connect the covered outdoor space of the portico with the internal one.

The building is made of wood, lifted from the ground, suspended on pillars that rest on specific reinforced concrete foundations.
The building is made with a structural system in wood carpentry and wooden panels.
The roof is flat. It is not planned to build a basement.
The structure of the building is in wood carpentry. The pillars have a static section of 16x 16cm, the beams of16x 32cm.
The structure is composed of a main order of beams and perimeter pillars arranged longitudinally to form portals.
Above the first order of the structure, the transverse beams of the roof are arranged at a rate of 2.50cm.
The beams work in support and have a maximum opening of 5 meters.

The structure is made of laminated wood glued impregnated by pressure, brown colored. The external walls are covered with 12 x 250cm larch wood planks, arranged horizontally, pressure impregnated, brown colored.
The window frames are made of wood.
The interior walls are made of larch wood finished with a coat of white veiling.
The ceilings are in lamellar beams and exposed larch wood. The floors of the entire house are made of smooth, colored concrete. The coloring gives the floor a bright, clear and warm tone.

The thermal power plant consists of a geothermal probe, the house is heated by serpentine drowned in the concrete of the floor.