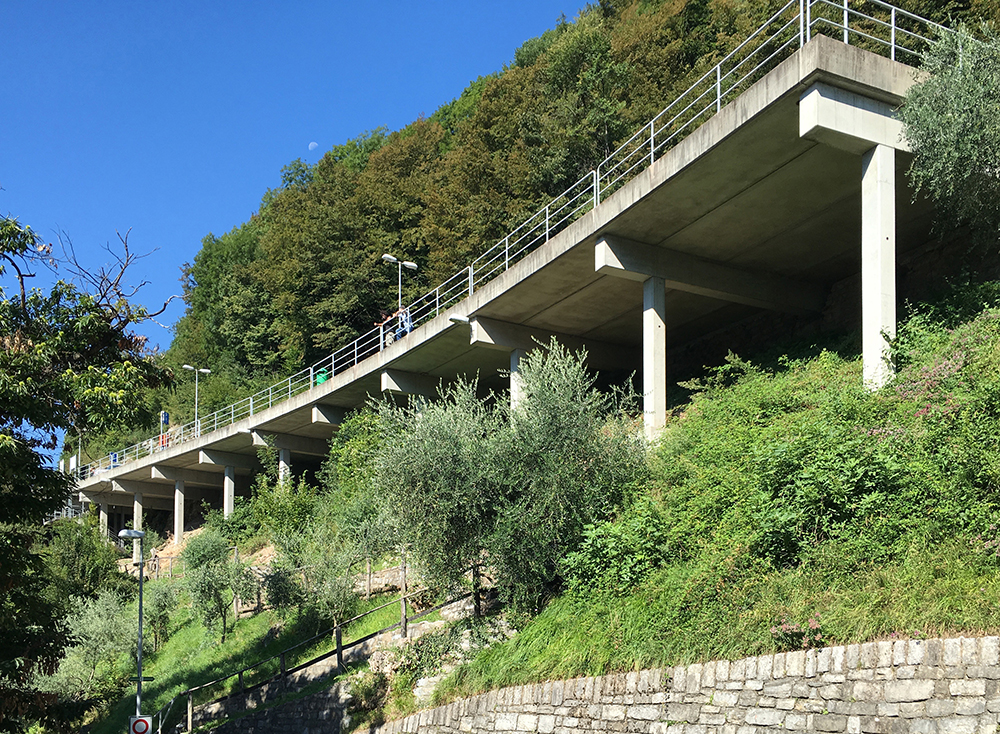 Gandria, a neighbourhood of the municipality of Lugano, is an ancient settlement of fishermen and farmers on the shore of Lake Ceresio, at the foot of Monte Brè. It is such a characteristic and picturesque location that it deserved a place in the ISOS (Inventory of Protected Swiss Settlements) list. Today Gandria is an important tourist attraction thanks to its particular geographical situation and to the quality of its spaces.

Since ancient times, the landscape of Gandria is characterized by cultivated terraces supported by dry stone walls. Numerous sources testify that the cultivation of olives in Gandria was already well established in the 14th century. Gandria was connected to the international road (built in 1936) only in 1951. Currently, the village has a car park that was built in the seventies next to the cantonal road connecting Lugano and Porlezza, Italy. Between the parking area and the lake there is a drop of 54 meters. The car park and the stairway that leads down to the lake give access to the olive path.

The “Jardin Vertical” project, which is located underneath the Gandria’s parking lot, is part of the riqualification masterplan of the olive path developped in collaboration with the environmental consulting and engineering firm Oikos.

The masterplan involves the enhancement of the numerous olive trees and the arrangement of the pedestrian path that crosses the village, connecting several terraced areas cultivated with olive trees.

The abandoned space underneath the parking lot had no particular qualities and it was used as deposit for excavation material. The path that runs next to the pilars of the parking lot was badly defined and overall bad looking.

The project aim to riqualify this space creating a vertical garden with different climbing plants. The plants will grow on a metallic structure made of steel beams and wires that is anchored to the parking pillars.

The parking lot is supported by beams and pillars in reinforced concrete 40 x 40 cm which define 8 spans.

The mettalic structure that holds the steel cables is made by galvanized steel beams and support shelves.

This support shelves are connected to the structural columns of the parking and hold the HEB 200 beams. Each span has 2 beams , one on top and one at the bottom of the pillar, on which cables are placed every 20 cm. The cables around which the plants will grow are held in place with M27 bolts (diameter 46mm).

The whole structure is needed to resist the wind force considering that each one of the 8 segment has an area of 32sqm and behave like a big sail. The forces are passed to the concrete pillars of the parking lot.

The cables appear to come out of the ground because the bottom beam on which they are connected is buried.

The green surface has an average high of 5m, the whole vertical garden is 53m long, has a total surface area of 265m2 and has 256 cables for a total lenght of 1280m

Coconut wires are added to the steel cables to ease the gorwth of the climbing plants and to give a more natural look to the structure.

Along the path a small Caprino stone wall ( Moltrasio limestone) has been constructed.

The greenery project foresees the development of the different plant species over the years and the changes of colors and density over the seasons.

At the end of the construction the vertical garden will be characterized just by the coconut wires.

The chosen plants are perennials. Each span is charachterized by a different plants compositions.

Each composition is a mixture of evergreen and deciduous species in order to provide some green also in winter season.

The 8 compositions that make the “Jardin Vertical” are:

8 – Wisteria Sinensis, Jasminum Nudiflorum, Cluster flowers purple (above) and yellow (at the base), deciduous + evergreen

On the wall in the shadowed area next to the parking ladder a combination of climbing hydrangeas (Schizophragma hidrangeoides + Hydrangea macrophylla), laurel bushes (Laurus nobilis) and arbutus shrubs (Arbutus unedo) are planted.